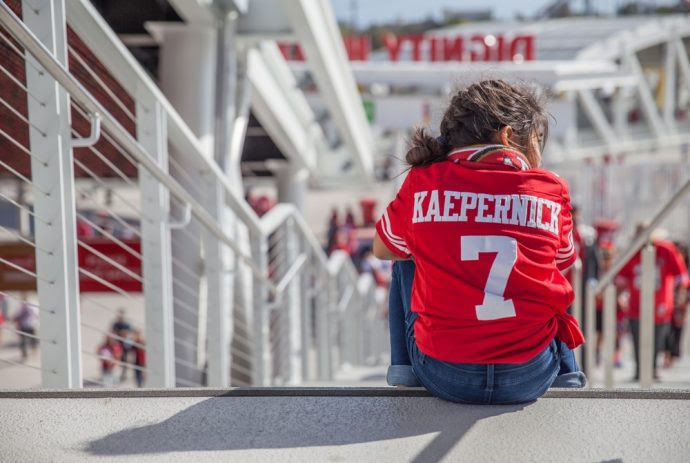 On Friday, September 22, 2017, in a last-ditch effort to support Republican Senator Robert Strange (who currently occupies the senate seat vacated by U.S. Attorney General Jeff Sessions), the U.S. president asked a crowd of Alabama on-lookers if they would “love to see one of these NFL owners, when somebody disrespects our flag, to say, ‘Get that son of a bitch off the field right now. Out! He’s fired. He’s fired!’”

Almost immediately following these remarks, the U.S. president would speculate about the popularity of the owner who fulfilled his aforementioned desire: “You know, some owner is going to do that. He’s going to say, ‘That guy that disrespects our flag, he’s fired.’ And that owner, they don’t know it [but] they’ll be the most popular person in this country.”

The U.S. president’s comments are among a long string of controversial statements, some of which have been pointed against U.S. citizens such as former NFL quarterback Colin Kaepernick who on September 1, 2016, took a knee during the singing of the U.S. National Anthem before an NFL game in protest of racial injustice and the long and continuing history of state-sanctioned violence aimed at people of color. While he was joined by two other players, San Francisco’s safety Eric Reid and Seattle’s cornerback Jeremy Lane, Kaepernick became the face of a national movement, and his protest locked him out of a job, as NFL owners refused to hire him.

It wouldn’t be difficult to argue that Kaepernick, the catalyst for the recent rise in NFL National Anthem protests, is still unemployed by the NFL because he stepped out of line. Every owner passed on his free agency, not because of his on-the-field performance, but because he was a “distraction” and none of them wanted that kind of attention to “distract from the game.” Yet the NFL has struggled with bigger issues than one of its players refusing to stand for the Anthem. It’s endured cheating scandals, locker room brawls, sexual assaults, domestic violence, and players who have committed murder. The most recent scandal in the NFL deals with CTE, an issue with which the League should be majorly concerned.

So why Kaepernick? And why now?

Kaepernick represents a particular prototype of Black man that all aspects of American society—from American schools to American sports—are structured to tame, punish, or destroy. This prototype, like Malcolm X, stands up in defense of themselves and others of their race, articulately and evidence-clad. However, when they do, they are seen as problematic, radical, arrogant, and defiant. In best case scenarios, the protests of these kinds of men end in them being ostracized, like in the careers of Paul Robeson and Colin Kaepernick. In worst case scenarios, the end is ultimately death, as in the assassinations of Dr. Martin Luther King, Jr. and Malcolm X. In this regard, the current U.S. president was elected to discipline Black bodies. His so-called “law and order” mandate would give him license as principal to inflict the punishment needed to tame the otherwise unruly Black body.

While the U.S. Constitution makes provisions for free speech and U.S. civil society champions protest, self-advocacy and social justice activism, seemingly underscored in the 1857 Dred Scott case, have never been viewed as tools designed for Black people, and specifically Black men. The most noted example is Muhammad Ali, who was ostracized for his social justice advocacy and stripped of his boxing license in nearly every state in the U.S. because of his stance against the Vietnam War. When he refused to be drafted, Ali not only challenged the U.S. government, he also challenged long-standing opinions that subjected Black lives to others’ control (just as slavery, convict leasing, mass incarceration, the industrial sports complex has). While the chains are less present, Black bondage under these conditions persists.

And, now here we stand in the 21st Century with Kaepernick challenging white supremacist views about the rights of Black and Brown people to advocate for themselves, to struggle against powerful forces for the freedoms under which the American flag soars. In this Century, where we readily boast of being a nation of laws, Kaepernick remains unemployed, not for any legal wrongdoing, but for stepping outside of white supremacist social and political culture.

On August 14, August 20, and then again on August 26, 2016—well before he took a knee—Kaepernick sat during the U.S. National Anthem. He explained his reason for sitting as a way of recognizing the oppression of people of color and police brutality.

On August 28, 2016—61 years after the lynching of Emmett Till, a 14-year old African American who was horrifically murdered in Mississippi for allegedly whistling at a White woman in 1955—Kaepernick met with reporters to further explaining his protest:

I’m going to continue to stand with the people that are being oppressed. To me, this is something that has to change. When there’s a significant change and I feel that flag represents what it’s supposed to represent, and this country is representing people the way that it’s supposed to, I’ll stand.

I have great respect for the men and women that have fought for this country. I have family, I have friends that have gone and fought for this country. And they fight for freedom, they fight for the people, they fight for liberty and justice, for everyone. That’s not happening. People are dying in vain because this country isn’t holding their end of the bargain up, as far as giving freedom and justice, liberty to everybody. That’s something that’s not happening. I’ve seen videos, I’ve seen circumstances where men and women that have been in the military have come back and been treated unjustly by the country they fought have for, and have been murdered by the country they fought for, on our land. That’s not right.

In a series of tweets in response to Kaepernick, the U.S. president (then a candidate) wrote:

“Roger Goodell of NFL just put out a statement trying to justify the total disrespect certain players show to our country. Tell them to stand!”

“Courageous Patriots have fought and died for our great American Flag — we MUST honor and respect it! MAKE AMERICA GREAT AGAIN!”

“Sports fans should never condone players that do not stand proud for their National Anthem or their Country. NFL should change policy!”

While Mr. McCarthy’s sentiments might suggest otherwise, Kaepernick’s blacklisting in the NFL hints at the de facto policy that players really do not have the freedom of speech, symbolic or otherwise. The unspoken truth is that they must stand (even against their own interests and their Constitutional right not too) or be punished.

We can use the martyrdom of Kaepernick to understand the (mis)treatment of Black boys and young men in our nation’s schools. Nationally, these vulnerable children of color, especially when they match the prototype of Malcolm, Martin, or Muhammad Ali, face the same fate as Kaepernick—one of grotesque and solitary exclusion. These boys and young men are often rendered voiceless, and are made to feel that self-advocacy is absolutely taboo. Should they choose self-advocacy as opposed to involving a parent or parents, they, too, are labeled and punished for being “defiant” or “aggressive,” “insubordinate” or “problematic.”

According to school psychologist Russell Skiba, schools are commonly defaulting to the use of the exclusionary discipline that includes the use of out-of-school suspensions, expulsions, and arrests. Moreover, the intersectionality of race and gender plays a major role in how children are disciplined. For Black young men and boys, the data illustrate a set of ominous themes: How they are at higher risks for office referrals, suspensions, and expulsions, even when White students commit the same infractions.

If we are to use the U.S. president’s and NFL owner’s responses to Colin Kaepenick’s protest as a barometer for how a particular prototype of American is treated, then what becomes clear are two outcomes: Black boys and men remain subject to the whip of exclusionary discipline both in school and out, and Black boys and men are always subject to extermination, particularly when they are found fighting for their lives. What also becomes clear is that silence, the rendering of this type of Black man and boy invisible, only makes his presence—which itself is an act of resistance—more profound.

Zakiyyah Ali is a program associate for the Metropolitan Center for Research on Equity and the Transformation of Schools at New York University. She can be reached by email at: zakiyyahali2013@gmail.com.

Unmasking the Linguistic Policing of Black and Brown Children in Today’s Schools: A Call to Action

College Applications and the Essay

Collateral Youth: The Impact of Anti-Immigrant Policy on Children

Enter your email address now and get news delivered right to your inbox.